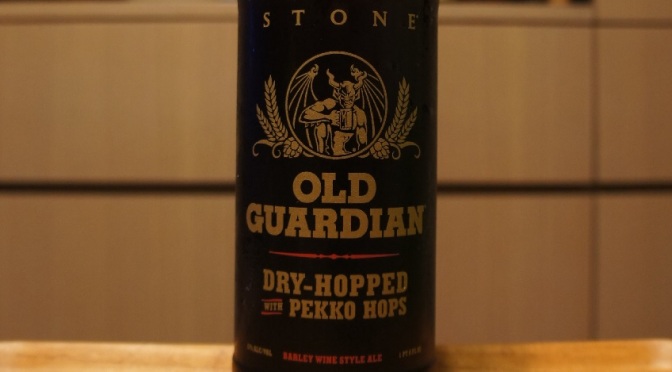 Brewer Description: (from bottle) 16 November. That’s how they write it here. It was just shy of an hour bike ride from (the future) @StoneBerlin to central Berlin for a special beer dinner tonight. Berlin is a total melting pot. Illustrated by the fact that I was invited by my Aussie friend Adie, who owns Monterey Bar, to a beer dinner featuring Scottish brewers at Salt n Bone – my favorite Berlin gastropub, owned by Becky & Andy, an Irish couple. A Punk IPA is in my glass. Andrei, my Russian friend who lives between Cali, Belize and Berlin (and owner of Belyzium, a phenomenal chocolate producer in Berlin), just joined us. The Chef is announcing the first course, paired with Hello My Name Is Holy Moose, a beer made specifically for the Scandinavian market. “Can I ask you a question when you have a moment?” asks Adie as I was typing just now. “Sure,” I reply. “The Arrogant Bastard…the text on the back of the bottle…were you the guy that wrote that?” “Yeah,” I reply. “Why do you ask?” “When I got my first bottle of Arrogant Bastard about five years ago, I thought, ‘What the F!?’ and I loved it. Never figured I’d meet the guy that wrote it, let alone know him.” I laugh. The room is starting to get a lot louder. Not surprising, since we’re now on the second beer. // Too funny. Ben Lee at Stone just sent me a perfectly timed email. I screencapped it. Ben’s role is to make sure beer gets done. All facets. All the way down to making sure I get the label written. Julie, who’s studying abroad from San Diego, is a couple of seats over. She has no idea who I am (which is fine considering that more than 7 billion people don’t either). // “So you finally stopped writing?” asks Larissa, another American. She works for BrewDog, but I first met her years ago in Munich shortly after she’d graduated from brewing school. “When is Sara coming?” That’s my beautiful spouse. “I want to take you guys to the Christmas Markt and drink glϋhwein.” Drink wha? It’s this odd German tradition around the holidays to take mediocre red wine, heat it up and Christmas-spice the bejeebus out of it, and serve it for tourist prices in outdoor clapboard markets. Xocoveza is more my speed honestly, but as a once-a-year thing standing in the snow in the middle of a German city in a large platz surrounded by well-dressed Europeans and fake old-timey booths hawking every kind of gift trinket (from cheap imported stuff to authentic-ish handmade stuff), it’s kinda fun, I s’pose…if you know you eventually get to retire to a great pub with awesome beer. // Now an hour later. It’s dessert time. A pumpkin tart. Perfect time to bring out the 2015 Old Guardian to share around the table. #Brilliantpairing. Things are changing here in Berlin. Exciting to be a part of it. Artisans, chefs, artists, chocolate makers, artisanal sausage makers and craft brewers are plying their trades. Moving from the commodified world back to a new version of old world. “This is quite lovely, thank you,” says Adie about the OG…the scruffy, 6” goateed, gold-chain-wearing Aussie owner of a heavy metal-themed bar in Prenzlauer Berg (on Danziger Strasse, no less) in the Dio T-shirt. Lovely indeed. No better times than great beer w/ good friends. Glad the bike ride back to my flat is a relatively short one.

Intro: A 22 fl. oz. bomber, 2016 release, bottled on 4th February 2016. Poured into a snifter glass.
Appearance: A hazy rusty orange brown colour with a nice one finger orangey beige head that had pretty good retention while leaving lots of nice lacing.
Aroma: Caramel, toffee, citrus zest, orange, pineapple, bread, maltiness, booze.
Taste: Sweet, caramel, toffee, butterscotch, citrus zest, pineapple, grape, plum, herbal and boozy.
Mouthfeel: Medium to full bodied with moderate carbonation.
Overall: The combination of sweet, citrus and boozy generally doesn’t work well for me, and it could be because of a terrible experience with mandarin vodka way back during my university years, but I can’t change that, and in this case, probably affected my view on this beer. The slight dark fruit notes probably saved it a bit for me, but in the end, not one of my favourite barleywines. 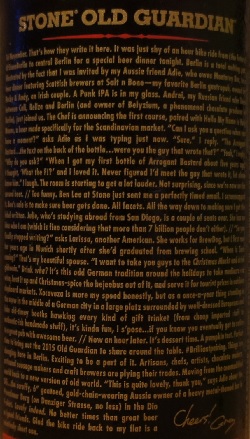 Intro: A 330ml waxed bottle, bottled on 6th March 2018, and with a best before date of 6th March 2023. Poured into a snifter glass.
Appearance: A deep dark copper amber colour with a thin beige head that sticks around while leaving fine spotty lacing.
Aroma: Marzipan, almond flakes, caramel and alcohol.
Taste: Sweet, marzipan, cherry, almond, caramel, brown sugar, syrupy and boozy.
Mouthfeel: Chewy, full bodied with soft carbonation.
Overall: I don’t know, I’m a bit unsure about this one. I’d enjoy one sip and the next sip would be just ok, and I’d keep flipping between the two throughout the whole drink. A strange one for me. After finishing, and much thinking throughout the sipping, I think that the almond was maybe too overpowering, and that it made it taste too pastry like for me. 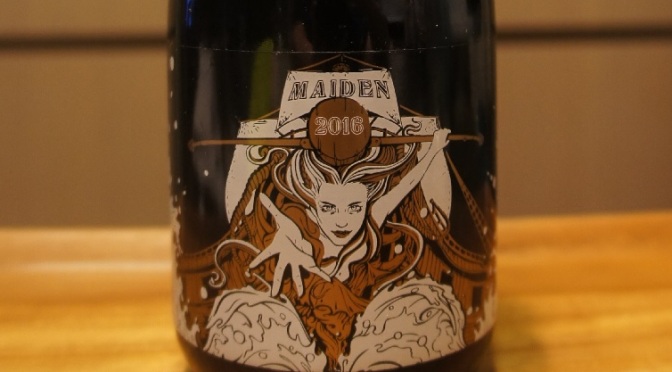 Brewer Description: (from bottle) The first batch brewed at Siren was to provide the base for our first annual release. This barley wine has been aged in many different barrels, and then using expertise from the wine and whisky world, blended into what stands before you in this bottle. The first brew of 2016 is now the base for the next year’s release. 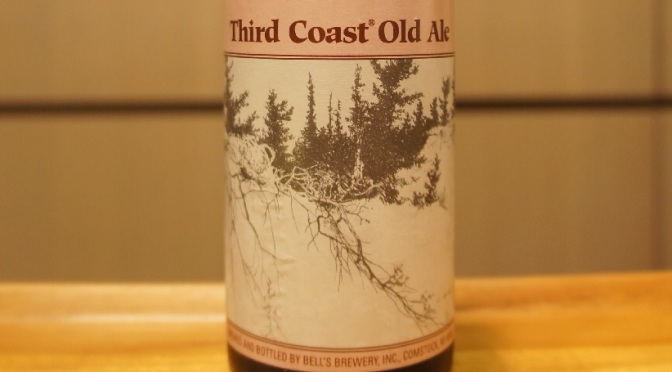 Brewer Description: (from bottle) An ale for those who appreciate complexity and vintage character. Fill a snifter and enjoy it now or commit some bottles to the cellar to test your patience.

Intro: A 12 fl. oz. bottle, batch 13615, packaged on 30th October 2014, so almost 5 years. Poured into a snifter glass.
Appearance: A careful pour leaving much of the sediment in the bottle, it was a deep copper amber colour with no head but some sparse spotty lacing.
Aroma: Malty, sweet, dried berries, dark fruit, blackcurrant, plum, prunes, fig, caramel, syrupy and a touch floral.
Taste: Moderately sweet, dark fruit, plum, prunes, raisins, fig, caramel, brown sugar, candied orange liqueur and a hint of mixed berries.
Mouthfeel: Full bodied with soft carbonation.
Overall: Yes, definitely pleasantly surprised by this as it has aged well. I’m pretty sure I meant to drink this earlier, but I simply forgot about it. In any case I’m not a huge fan of Barleywines, but this was a very nice sipper with great complexity. 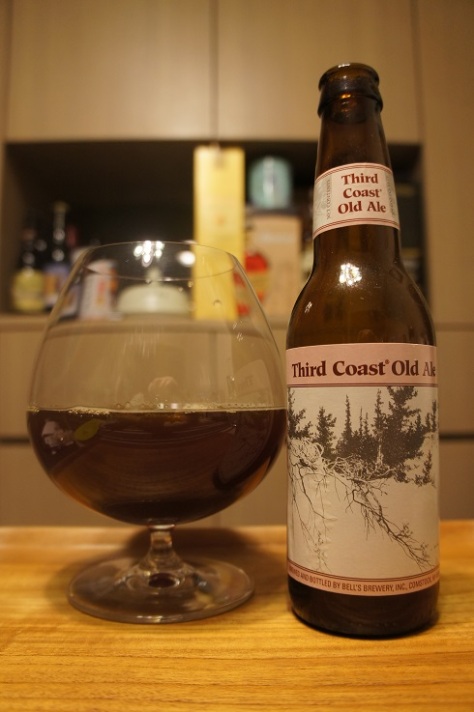 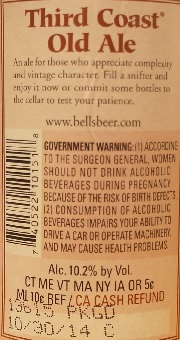