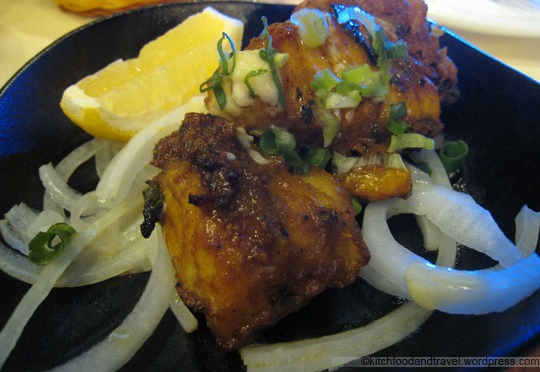 One Michelin Star? I struggle to understand. In fact, there are better Indian restaurants around such as Aladin Mess in Causeway Bay, which I still think is the best Indian restaurant in Hong Kong. I’m not saying that Hin Ho is a terrible restaurant, but there certainly could be improvements. Hin Ho Curry is located a bit out of the way in Shau Kei Wan, and it was only because I finished hiking in that area, that I decided to pay them a visit and see what all the fuss was about.

The restaurant itself was relatively small and could fit about 40 persons. While I’ve heard of lines outside, when we got there around 1:30pm, we could walk straight in and immediately get a table. The lunch sets are a great deal at $45 per set +/- depending on the drink you order. The set includes a daily soup, a main dish, naan bread or rice and a drink. There were lots of reviews reporting bad service, yet what we got was pretty good service overall. However, for some reason, I did get the feeling at times where I understood those bad service reports but they were not directed at us so I can’t really comment.

Despite my strong urge to try their beef tongue due to my love of beef tongue, in the end, we ordered the Tandoori Yellowtail Fish Tikka and the Baby Beef Flank Curry lunch sets.

Pea Soup (I think) – The pea soup came pre-peppered which is not normal. BUT the amount of pepper that they put in was perfect! The soup was amazing and up there with the pea soups I’ve tried at Amber and Caprice. I think that says quite alot about the soup!
Naan Bread – Although the naan doesn’t appear to be ‘burnt’ enough, it was actually pretty good. It was both hot and crispy and was perfect to dip with the curries.
Tandoori Yellowtail Fish Tikka – I ordered this rather than the Beef Tongue Curry only because I wanted to compare with a dish I enjoy at Aladin Mess. The curry for the Tikka was really good, but the fish itself was a slight disappointment as I had high hopes because the one at Aladin Mess was excellent everytime. It was just not as soft or juicy as I had hoped for but still decent though.
Baby Beef Flank Curry – Again, like the fish, the curry with the beef was excellent. The beef itself was not tender though and really tough to bite into at times.

Having said all that though, it is a restaurant that I would go back to try its other dishes especially the Tandoori Beef Tongue. The soup was superb and although the meats were not the best, the curry that supported the dishes were extremely tasty. BUT Hin Ho Curry is NOT a one Michelin starred restaurant. It is definitely not on the same level as a restaurant like Hoi King Heen (海景軒) and its not even as good as other Indian restaurants in Hong Kong like Aladin Mess (review to come).

Breakfast for dinner! Yum! The ever reliable Normal Set (常餐) is available and upon asking the wait staff, they recommended the Corned Beef and Egg with Nissin Instant Noodles (鹹牛肉蛋餅出前一丁). Sounds great!

Normal Set – scrambled eggs and ham . buttered toast . char siu with macaroni . coffee/tea
You can choose any style of eggs you want and the macaroni can be changed to spaghetti with either char siu, beef or ham. In my opinion, the most important part of the normal set are the eggs. In places like bing suts, I like my eggs scrambled and here they make them nice and runny! The toast is just standard and the macaroni perhaps a bit bland, but the char siu is nice and tender. The milk tea here though is great!

Corned Beef and Egg with Nissan Instant Noodles
It came out pretty much to be a corned beef omelet. Maybe I’m biased as I love corned beef and I love egg, so there is just no way that this could turn out bad. The instant noodles was also cooked ‘hard/raw’ which in my opinion is perfect. There are just too many places that overcook instant noodles such that they become soft and soggy which is just wrong.

I will absolutely continue to love breakfast for dinner and they have great eggs and instant noodles here.

While I like Thai food and Vietnamese food, I’m not a big fan of restaurants serving different cuisines as I’m a firm believer that they should specialize. Having said that, Nahm does offer a very filling and reasonably priced set lunch which includes a salad and a main for under $100. Admittedly though, there are better Thai and Vietnamese restaurants around.

Green papaya and green mango salad
Enjoyed this cool and refreshing salad. The papaya and mango were fresh and went well with the herbs and acidity.

Lemongrass Thai egg noodle with grilled porkneck and basil salad
When I first saw this, it looked pretty interesting for a salad and the portion was huge. The porkneck was cooked pretty nicely, but the egg noodles and rest of the salad was only ok.

Pan-fried fillet of Sole in yellow curry with jasmine rice
If you didn’t know already, I love my fish and even more so with curry. Happily, this one did not disappoint either! The dish itself looks pretty plain (in fact, pretty sloppy too), but taste wise, the Sole was cooked nicely and remained juicy. The curry and fish also complemented the rice well.

Pad Thai noodles with prawn and squid
First thing is that it has squid so clearly, I did not order this. I hate squid. But I’m not being biased when I say that this was a below average Pad Thai. It was lacking in egg and also the peanut crunch, and just didn’t taste all that good. EVEN without the squid!

Overall, the food is good for a lunch set, but I doubt I would eat here for dinner when there are other better Thai and Vietnamese options. 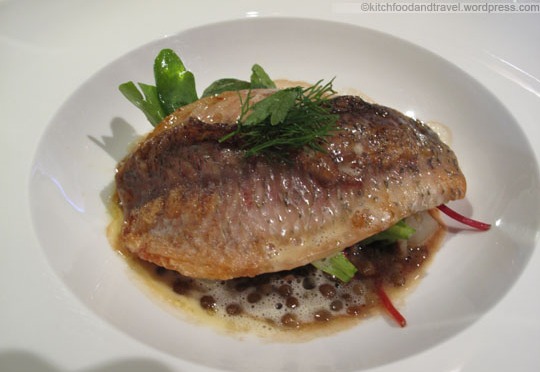 FINDS is a Scandinavian restaurant, and in case you didn’t know, stands for Finland, Iceland, Norway, Denmark and Sweden. Having moved from LKF in Central, it is now located in TST at the nice boutique hotel, The Luxe Manor.

atmosphere . menu . bread
The tables have a nice design and the restaurant itself was very spacious. We came by during lunch on a weekend and there wasn’t many people around despite the fact that the 3-course lunch set seemed like a good deal. I’m not sure even half the restaurant was filled. Service was up to par, but nothing special. The bread was served warm with a choice of butter, olive oil and cream cheese as a spread.

Roasted Pork Loin with Caramelized Apple – cucumber . pea sprouts . extra virgin olive oil
I had a taste of this only since it wasn’t me who ordered this, and I thought that it was super sweet. The caramelized apple and pork obviously go together, but this was too sweet for me. In addition, the clear jello like thing on the side was just a bit weird as it was kind of tasteless.

Green Pea Soup – crushed black bread . basil cream
I ordered the green pea soup since I really wanted to compare it to the ones I had at Amber and Caprice. Personally, I hate peas. But I have to say the super excellent pea soups I’ve tried at Amber and Caprice have allowed me to try the pea soups at other restaurants too. The result? The soup was creamy and slightly lumpy to give it some texture and overall, it wasn’t bad, but at the same time, it wasn’t nearly as good as the others I’ve tried.

Forest Mushroom Risotto – baby carrots . onions . sauteed mushrooms . cherry tomato
I did not get the opportunity to try the risotto, but it looked pretty good albeit vegetarian.

Pan-fried Barramundi Fillet – braised lentils . rocket . red chard . fennel sauce
The barramundi was nice and cooked perfectly. However, I didn’t really care for the lentils that accompanied it as they were just bland.

Grilled Lamb Tenderloin – parsnip puree . sauteed edamame . mushrooms . fingerling potatoes . red wine sauce
The lamb was also cooked nicely. However, again, like the fish, the accompanying foods were just bland. The potatoes and mushrooms just didn’t taste any good even when mixed with the parsnip puree.

Overall, I think the lunch here is a good deal. I’m not sure if the blandness in some of the accompaniment was just today, but the atmosphere was nice and relaxing such that I am willing to overlook that at least one more time and give it another try.

Dropped by this ramen place for lunch. I suppose it has the unfortunate circumstance of having to be compared to my latest great review on Butao Ramen. But having said that, I think that even if I did not try Butao recently, I would have something to complain about here.

Ordered the scallop and ramen set with the ramen in the original “shio” (salty) creamy pork broth. The menu mentioned that we could ask for the noodles to be softer or harder according to our preference; so I ordered my noodles to be harder. The set arrived and I think I would have preferred it if the egg was only half cooked and the yolk runny (溏心蛋).

Tried the ramen first, and unfortunately the pork was tough. I don’t think that it was just overcooked, but the slice of pork given just wasn’t that good. The noodles itself though was pretty good. I asked for harder noodles and that is what they gave me. The broth was also decent albeit a bit oily and unlike at Butao, I did not feel like finishing the broth.

Scallops and butter certainly go together, but in this case, it was not as good as I hoped for. As far as the scallops go, they were fine. But perhaps there was way too much butter? At the bottom of the rice bowl, there was a collection of melted butter that was being absorbed by the rice. I like butter, but this was just too much.

While not the best ramen place around, there are other dishes that I would like to try here such as the 日式撈麵… (sorry, need to figure out what 撈麵 is in English) and so I cannot write this place off yet.