Brewer Description: (from bottle) This is an aggressive ale. You probably won’t like it. It is quite doubtful that you have the taste or sophistication to be able to appreciate an ale of this quality and depth. We would suggest that you stick to safer and more familiar territory–maybe something with a multi-million dollar ad campaign aimed at convincing you it’s made in a little brewery, or one that implies that their tasteless fizzy yellow beverage will give you more sex appeal. Perhaps you think multi-million dollar ad campaigns make a beer taste better. Perhaps you’re mouthing your words as you read this.

At Stone Brewing, we believe that pandering to the lowest common denominator represents the height of tyranny–a virtual form of keeping the consumer barefoot and stupid. Brought forth upon an unsuspecting public in 1997, Arrogant Bastard Ale openly challenged the tyrannical overlords who were brazenly attempting to keep Americans chained in the shackles of poor taste. As the progenitor of its style, Arrogant Bastard Ale has reveled in its unprecedented and uncompromising celebration of intensity. There have been many nods to Arrogant Bastard Ale…even outright attempts to copy it… but only one can ever embody the true nature of Liquid Arrogance!

Intro: A 22 oz bomber with an enjoy by date of 9th October 2015 and poured into a snifter glass.
Appearance: Poured a very nice clear dark copper amber colour with a one finger tanned head with low retention but leaves spotty lacing.
Aroma: Strong caramel malt aromas followed by maple syrup, toffee, almond and pineapple. There were also hints of minerals and also piney hops towards the finish.
Taste: Sweet-ish roasted caramel malts mixed with grapefruit and pine hop bitterness. The finish is a very nice long lasting bitterness.
Mouthfeel: Mid to full bodied with medium carbonation and nice light alcohol warmth.
Overall: I haven’t had the chance to try many American Strong Ales, but this one was really good. Great balance and the lasting bitterness at the end along with the light alcohol warmth make it really enjoyable. 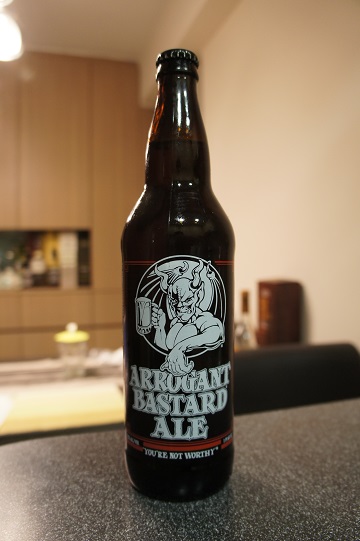 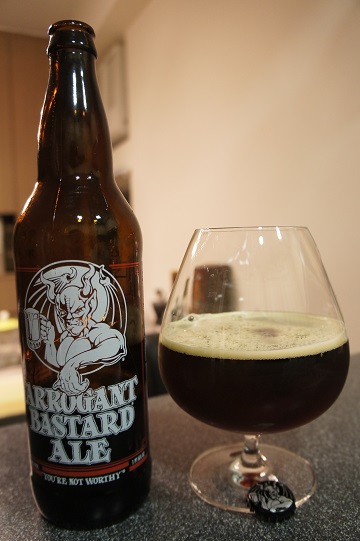