Brewer Description: (from bottle) It’s late July as I write this. Weather’s been great. Good San Diego weather – nice and hot, but not too hot. The days are like a warm burrito accented by the salsa fresca of the afternoon’s cool ocean breezes. Perfect beer-drinking weather (admittedly, I think ALL weather is perfect beer-drinking weather). August is knocking on the door. September and our 5th Anniversary Open House are just around the corner, and the phrase “going green” is beginning to take on a life of its own. Seems like I’ve been asking Steve and Lee for weeks for some hints on what they are doing with the Anniversary IPA this year and I haven’t been getting anywhere. It’s tough to rope in a brewer sometimes. So, just now I went out in the brewery looking for one of them and, lo and behold, I managed to corner them both. “OK, you guys,” I said, planting my feet firmly, “nobody’s going anywhere until you tell me what the hell we’re doing with the 5th Anniversary IPA so I can write up the label.” After a long pause and some shifty glances side to side looking for an out, they realized the only way they were going to get away from me was to give up some information. “We plan on doing a lot more dry hopping this year,” said Steve. I had kinda figured that, so no way I was going to let them off that easy. “Actually, we’re going to hop it more all around, just especially in the dry hopping,” volunteered Lee. Jokingly, Steve piped in: “Hmmm, maybe we could just pack a fermenter with hops and then fill the remaining space with fermenting beer. Heck, why not just switch the amount of malt we use with hops…that way we could add a little malt in at the end and say that we’re ‘dry-malting’ it.” Now, that’s a thought…. So, how would we describe this year’s Stone 5th Anniversary IPA in comparison to years 1-4? In a word, “more.” Enjoy it because there won’t be any more Anniversary IPAs after this one…

Intro: A 22 oz bomber, bottled on 25th August 2016, to be enjoyed by 23rd November 2016 (drank on the 26th, so I’m three days late). Poured into a Spiegelau IPA glass.
Appearance: It poured a clear copper amber colour with a big three finger white head with pretty good retention and nice lacing.
Aroma: Citrus zest mostly mandarin and lemon, grapefruit, pine, biscuity malt and flowery.
Taste: Biscuity malt, light caramel sweetness, mandarin, orange zest bitterness, a hint of tropical mango and peach, with a light floral and herbal element.
Mouthfeel: Medium bodied with moderate carbonation.
Overall: I was not impressed with my first sip, BUT actually, this got a lot better the more I drank it. Its not too sweet and not too bitter in my opinion, which seems to be a rare thing with Double IPAs these days. I enjoyed it, especially the more I had. 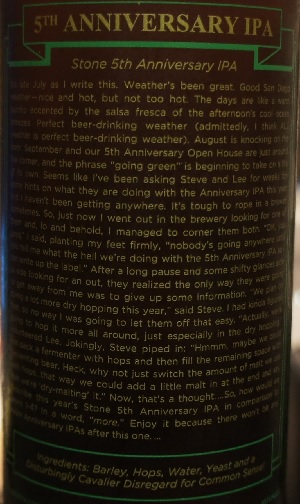